Blog Is It Ever Worth It to Give Up Copyright Ownership of Your Songs? A Music Lawyer Explains.

Is It Ever Worth It to Give Up Copyright Ownership of Your Songs? A Music Lawyer Explains. 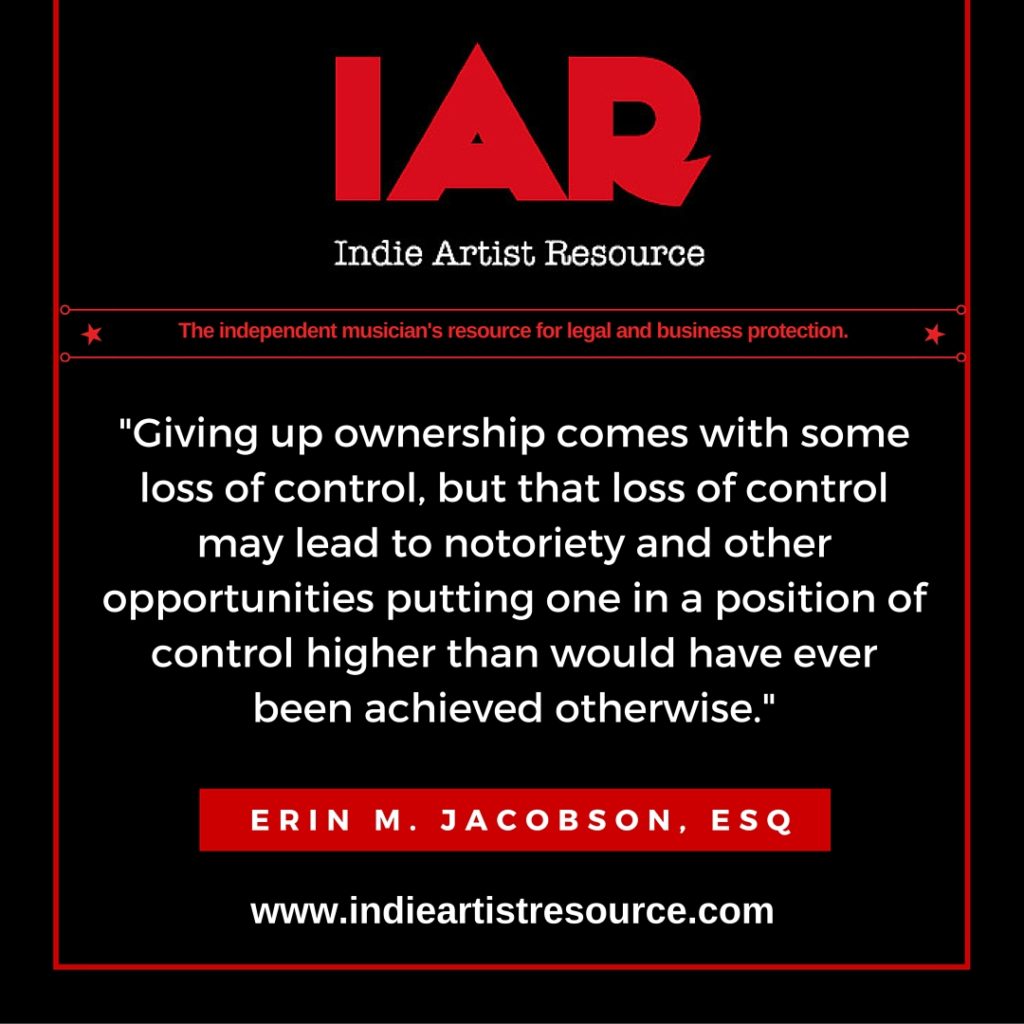 Retaining ownership of the copyrights may be one of the most important decisions in an artist or writer’s music career. The person who owns the copyrights is the one with the control over how those works are used and also the one entitled to the money earned from those uses. However, sometimes holding on too tightly to copyright ownership may prevent an artist or writer from taking advantage of opportunities to grow his or her career. The age-old adage that sometimes you have to give a little to get a little is true, but one needs to look at the opportunity cost and decide if giving something in a specific situation is worth what will potentially be gained.

Here are a few instances when giving up copyright ownership may be permissible.

1. When it will make you a lot of money.

I’m not suggesting one should sell out just for a hefty paycheck, as sometimes dollar signs can’t substitute for artistic integrity. I’ve also seen a lot of deals (especially in music library situations) where an artist or writer is being offered just a few hundred to a few thousand dollars in exchange for full or partial copyright ownership of a song that is really valuable to the artist or writer’s catalogue and career. In this instance, such a small amount of money may not be worth the control and potential revenues lost later if the song does well in the marketplace.

On the other hand, I have some clients that write consistently and don’t care about giving up ownership as long these songs will churn out money, especially for placements. They feel they can always write another song and are more concerned with making their music earn money for them over crafting songs to define their careers.

2. When it will give you opportunities you wouldn’t get otherwise.

This is a situation where working with a certain company, or in many cases a certain producer, will be able to propel an artist’s career forward and help that artist achieve notoriety that wouldn’t be achieved otherwise. As mentioned, a typical example of this is working with a big producer who is considered to be a hit-maker in the industry. Often these producers don’t even co-write on the compositions, but granting them a percentage of songwriting ownership is mandatory for being able to work with them. After all, one could retain 100% of a song that most people will never hear, or one could give up 20% and have the song hit top ten, make a lot of money, garner name recognition, and bring the artist more opportunities than the artist would have gotten otherwise. In this case, it seems like a small trade-off and can be used as a means to an end – one might have to give up some ownership in the beginning of a career, but that could lead to a level of status in the industry where one can retain ownership and call the shots on future projects.

3. When it is in line with your goals.

A new artist seeking a label deal, especially a major label deal, will not own their masters. An up-and-coming writer wanting a publishing deal will have to give up all or part of songwriter ownership. This is what comes with the territory of growing one’s career via the traditional industry structures. It also makes sense from a business standpoint because a label or a publisher is not going to invest time and money into an artist or writer without getting something in return , and part of their return on investment is ownership of intellectual property.

However, if an artist has a vision of making a living off of music in a completely DIY structure, or that the freedom of complete control is more important than working with others more established in the industry, then sharing ownership might not be the right choice.

Longevity and sustainability in the music business, especially in its current state, comes with catalogue ownership. Giving up ownership comes with some loss of control, but that loss of control may lead to notoriety and other opportunities putting one in a position of control higher than would have ever been achieved otherwise.

Whether to give up copyright ownership is a big decision, and it is one that should be discussed with the artist’s advisors. The choice right for one artist may not be right for another. The decision will come down to what is right for each artist’s career.

If you need help deciding whether to give up copyright ownership in a deal you’ve been offered, book a consultation now.

This article was previously published on Sonicbids.com.