Home Blog Are You Sure You Own Your Masters?

Are You Sure You Own Your Masters? 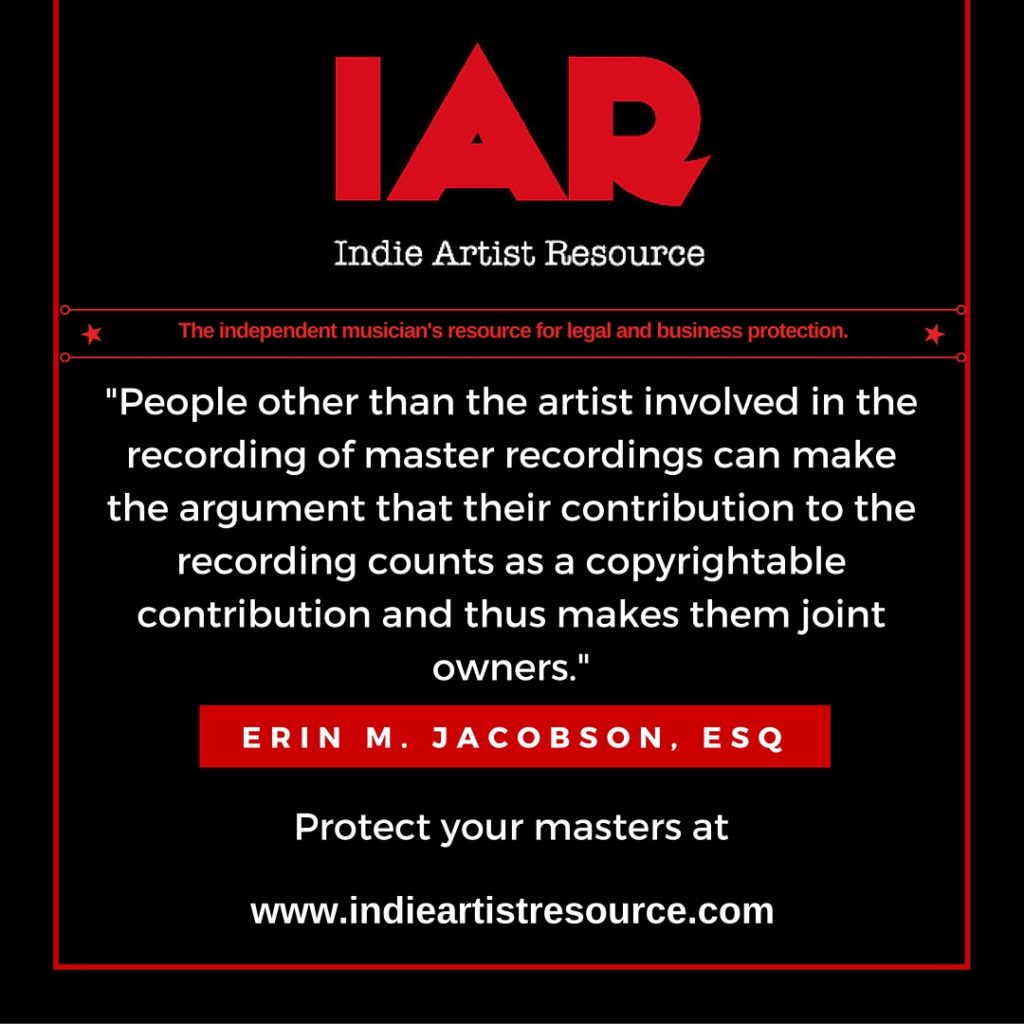 Throughout the music business, master recordings or “masters” are typically regarded as to as the original or official recording of a performance fixed in a tangible medium like tape, ProTools file, or even mp3, from which copies can be made. Masters are usually recorded in a recording studio or similar setup and these are the original tracks that get mixed and mastered (another sound processing step using the same term but with a different meaning than a master recording). Released recordings purchased on a CD or digital download are not masters, these physical goods are copies of the original masters.

Who Owns the Masters?

Common sense and matters of principle usually cause most independent artists to feel they should own their masters because they are the ones that contributed the performance and are often paying for the recordings. However, oftentimes other owners can be involved as master ownership can vary based on law as well as contract.

These contributions can include influencing the sound whether by musical contribution or other direction, recording techniques, microphone placement, etc. Some producers and engineers are more involved than others. With engineers, it’s mostly about the recording and/or mixing techniques used. In the case of producers, they might just be advising on the sound and encouraging the best performances from the artist, or they might actually be playing instruments on the recordings or co-writing the songs. Producers and engineers may be able to argue partial master ownership based on their contributions, but many independent producers are also using contracts to ensure they own all or part of the masters in an attempt to build an income-producing catalog in addition to their producer fee and royalty. For some producers with great influence in the industry, this may be a requirement for artists to work with that producer, however, I always advise artists to make sure that giving up this ownership is actually worth the success this producer will add. Do not give up ownership (or at least not a large portion of it) without being certain that it will be worth it from a career standpoint.

Recording studios sometimes say that they own the masters and they will then release the ownership to the artist once the bill has been paid. Studios argue this because the masters were recorded on studio property, with studio equipment, and studio employees. While these arguments have been successful in past cases regarding photography, success of these arguments from a music industry standpoint would depend on the actual circumstances of the situation. While the studio does have an argument based on this contribution, these tactics serve mostly as a way for the studio to make sure it gets paid.

Most artists think because they may have paid these other people for their services, that their ownership rights are covered. However, paying for something doesn’t always mean ownership of it, especially under copyright law.  Section 202 of Copyright Law says “Ownership of a copyright, or of any of the exclusive rights under a copyright, is distinct from ownership of any material object in which the work is embodied.” So while you may have tape (or hard drive) in hand, that won’t stop someone from claiming an ownership stake of the copyright.

Usually, a recording agreement will provide that the label will own all master recordings recorded by the artist during the term of the agreement.

“Work made for hire” is another buzz word that artists (and labels) think applies because there was payment for services – and because mostly all recording agreements include this language. A work made for hire must be made by an employee under the scope of his or her employment, or in the case of independent contractors, must be specifically commissioned by the party seeking to own the work and fall within certain categories listed in the law. In most situations where artists are recording music, the parties involved (whether it be artist v. label, artist v. recording studio, artist v. producer/engineer, etc.) are independent contractors, so the employee provision will not apply. Sound recordings are also not included in the specific categories that copyright law lists as eligible for work made for hire status. Most labels make the argument that record albums are collective works (one of the allowed work made for hire categories), but this ambiguity leaves masters open for joint ownership without a proper copyright assignment.

In the Real World

A recent example occurred where A&M Records sued a recording studio claiming one of the studio owners had rights to the master recordings for the album “Temple of the Dog”, by the band of the same name, a side project between musicians Chris Cornell (Soundgarden, Audioslave) and Eddie Vedder (Pearl Jam). The label claimed it bought the masters and the rights from the studio and had an agreement to prove it, but those on the studio side said that not all owners of the studio had signed the agreement and the owner who had not signed the agreement had not given up his rights to the recordings. The lawsuit recently settled out of court, and the tapes were returned to Chris Cornell.

What should an artist to do to ensure master ownership?

Artist intending to fully own their masters should have written agreements in place with everyone involved in the recording process — the studio, engineers, producers, and hired musicians. These agreements should clearly state that the artist owns the masters and include language whereby these contributors will transfer their rights in the masters to the artist.

These agreements do involve many components and complex language, so they should be drafted by an experienced music attorney. If the artist’s financial situation prevents him from hiring an attorney (or other reasons prevent hiring an attorney), then DIY templates of the appropriate agreements can be downloaded from Indie Artist Resource.  (For IAR templates, CA residents click here and Non-CA residents click here).

This article was first published on Sonicbids.com.