Home Blog Don’t Get Screwed Over : 3 Scenarios Where a Handshake Deal Isn’t Enough

Don’t Get Screwed Over : 3 Scenarios Where a Handshake Deal Isn’t Enough 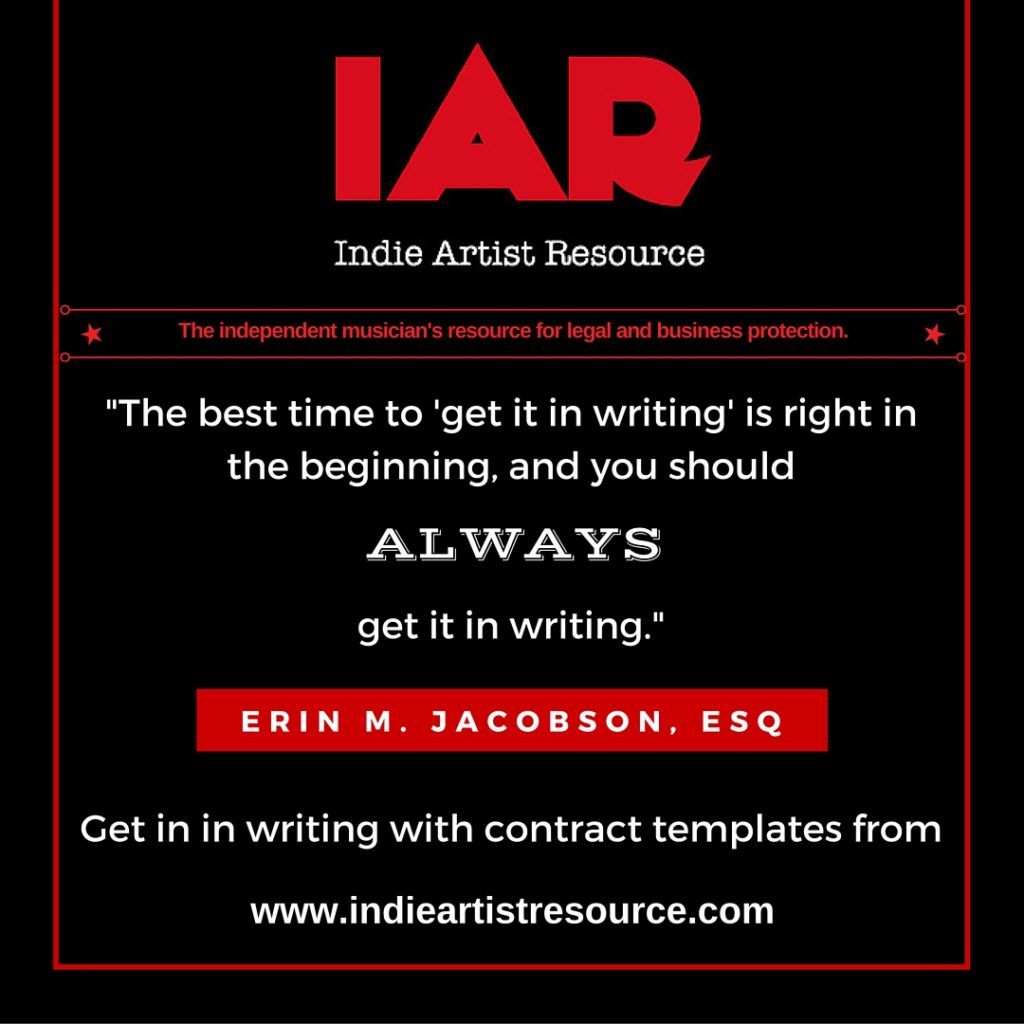 Musicians often ask me when they need to “get it in writing” as opposed to just having a verbal agreement or handshake deal. The real answer to that question is that you should always get agreements in writing, but there are three frequently occurring scenarios where it’s essential. Doing so will provide you with much needed protection later on when money or fame create unanticipated problems. Here’s how to handle each situation.

This agreement is important because it offers some proof if someone who’s not a writer tries to claim he or she is owed a credit or portion of ownership or royalties on a song. Here’s a story of an actual situation that happened to a band several years ago.

A new band wrote some songs for their first album while in the studio. As is fairly common, the band had some friends and band members’ girlfriends in the studio with them. One of the songs the band wrote that day in the studio ended up being a huge hit for them that produced a large amount of royalties. The band never completed a songwriter split agreement.

A short time after the song became a hit and the money started rolling in, a girlfriend – now ex-girlfriend – of one of the band members contacted the band and said that the band had promised her 10 percent ownership of the song for contributing a certain line. The band said that they never promised her anything, but she threated to take them to court. The ex-girlfriend had no proof she actually contributed to the song, but the band had no proof that she was lying.

In order to avoid an expensive lawsuit, the band had to give her the 10 percent she wanted. While a written agreement doesn’t prevent someone from making a claim, if the band had completed a songwriter split agreement at the time the song was written, they would have had some sort of proof that the ex-girlfriend was not one of the writers of the song or owed any ownership interest in it. They could have potentially avoided giving up 10 percent ownership and income to someone who didn’t earn it.

2. Working with a producer

Musicians often come to me with problems they’re having with a producer. Often, the producer isn’t turning over the masters because there was a misunderstanding between the parties, or sometimes a producer’s claiming more ownership or income share than he or she should.

The source of these problems is usually that the band didn’t get the terms of the agreement with the producer in writing. As a result, the parties had different understandings of what they each thought the agreement entailed, important terms hadn’t been discussed and left to work out at some later date, or someone changed his or her mind because he or she didn’t have anything in writing to dispute the new terms.

Producer agreements are really important because the creator of the music is bringing in a third party who contributes (some more significantly than others) to the masters and sometimes to the compositions. Producers sometimes have claims to master ownership or require a songwriting credit when they haven’t written part of the song. Producer fees and royalty structures can vary based on genre, stature of the producer, and whether there’s a record deal involved. So, again, having the payment clearly defined is essential.

A band came to me recently after working with several producers on their album, with no written contracts. After spending a lot of money on recording, the band had allowed the main producer on the album to dictate terms of compensation with all the other producers. When the album was finished, the band was left with only 10 percent ownership of all compositions and masters on the album when they were the main songwriters and only performers.

I asked the band why they didn’t seek my counsel or other assistance earlier instead of waiting until this point, and their answer was that they had hoped things would improve on their own. Had the band sought advice on this situation earlier and gotten producer agreements in place with fair terms, this situation could have been avoided.

Band agreements are also really important because every band is different. In some bands, everyone writes and all members share equally in royalties, and in other bands, only the main members share credit and royalties while other members are treated more like employees. Bands also have unique issues regarding the band name and who can use or perform under that name if the band breaks up or a member leaves.

The time to create a band agreement is right in the beginning stages of the band when all members are still on good terms with each other. The conversation about the issues covered in a band agreement may seem uncomfortable at first, but ultimately clarifies expectations and protects everyone in the band. If certain band members are unreasonable or cannot agree during this initial conversation, that’s a red flag you’ll be glad you discovered sooner rather than later.

Although being in a band is a creative and fun experience, what many musicians forget is that it is also a business, and needs to be run as such in order to stay organized and find success.

Here’s a story about why having a band agreement is important: I received a call from a musician whose band was in the process of breaking up. The band had been together for several years, and this musician wanted to know if he could continue earning income from the band’s songs and whether he could use the band name in the future.

I learned the band didn’t have an agreement and hadn’t discussed ownership of compositions, masters, artwork, the band name, or how any of these things would be treated if the band broke up. The relationships between the members had turned contentious, and there was no way any of them were in an emotional state to agree on anything.

Because the members weren’t talking, it would have taken a lot of investigation or possibly litigation to figure out how the material should be split and who could use the name going forward. It was very probable this musician would no longer be able to profit from the hard work he had contributed to this band over the last several years.

Had the band created a band agreement in the beginning, they could have discussed these issues and decided how all of their material would be treated in the event of a breakup. While the agreement wouldn’t have prevented a breakup, it would have clearly explained how the material was to be treated and how the members could proceed when the event occurred instead of potentially stripping the members of the proceeds of their contributions.

How and where do you get it in writing?

The best option is to hire an experienced music attorney to draft these agreements with language and terms specific to the situation at hand.

If you cannot hire an attorney due to the cost or other reasons, you can download high-quality contract templates drafted by a music attorney at Indie Artist Resource. Each template covers the most common issues faced in those situations by musicians and comes with instructions to facilitate easy completion of the agreement.

If a formal contract is still not possible, having some evidence in writing is beneficial. You can follow a verbal conversation with an email saying, “To recap the terms of what we discussed…” and then briefly summarize the terms so there is a written record of it. While it is not the same as or as strong as having an actual signed contract, it does help to leave some trail of proof if things go wrong down the line. This is a good idea especially for situations where contracts aren’t always used, like casual agreements with venue talent buyers or promoters.

This article was originally published on Sonicbids.com.

Get It In Writing Now
Get the agreements you need now to protect yourself.
Show Me the Contracts